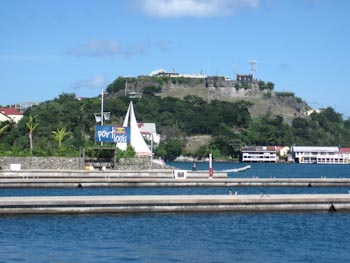 This year's non-bonaire dive trip, after much debate, was to Grenada. This island was pleasant tropical surprise. Getting their both in cost, distance and flight arrangements wasn't much worse then Bonaire. There is no daily direct service from a US gateway, but several weekly flights.

The island is a lush tropical paradise. Contrary to what we had heard the people was met were very friendly with no apparent resentment to Americans for the invasion. Even though there is around 30% unemployment, during the week there I was approached only by one panhandler which compares to the three that I dealt with in one hour at the Newark Train Station. Being from Bonaire I was really surprised to only see bars on the windows in St George.

We stayed at the Coyaba Beach Resort on Grand Aise Beach. It is an older style hotel, the room are not gigantic, but very much on the upper end of the curve for place I have stayed. Hidden charges like for use of safe were non existent. The water was drinkable. They went to great strives to maintain the building and property.. They were having some issues with their water system towards the end of our stay, but that were really trying to fix the problem. They hotel offers an all inclusive, and a continental breakfast was included in the standard package. You could upgrade to the hot breakfast anytime you chose. The dining room was a little formal (yeah they want long pants). We found several places we could walk to down the beach for dinner and across the street were also a number of local restaurants which were quite good and reasonably priced. I think we only had issues with service once and that I feel was more an issue of timing. Most instances the staff went out of their way to accommodate. Next to the dive shop was a new place called Umbrellas open by Westley Rum. It had just opened, yet the staff and kitchen seemed like they had been open for years. For burger fare it was quite the place. I think we had the most number of meals there.

Being in the beach was no where as bad as you mighty be lead to believe. The hotel maintains a private area so you can totally avoid the beach vendors. But the vendors were in general respectful and far better then t-shirt shops i have dealt with the French Quarter or in Cozumel. The Tourist authority and hotel security had a constant presence to deal with any issues.

We dove with Eco Dive and Trek, which is located at the hotel. They load the boat normally from the beach, although one day due to high waves they transported us to the marina. This operation is under new ownership and is really impressive for a small operation with even a Marine Biologist as part of the staff (yeah a marine biologist actually found semi-honest work). Diving is moderate drift diving, (I am one of the few people who dislike that) with some cross currents. Even though we never had more then 8 divers in the water, they always had two staff members in. I have rarely seen such a practical approach to diving. On most dives it was true "diver's freedom".. we were usually bringing the dive staff up. Profiles could be a little on the square side, but they adapted well to our bonairian profiles. Although a couple of us want to dive the Bianca C we opted out. The standard controlled profile was not really worth the effort. I am not in the least bit upset about that. I was offered alternatives and in quiet discussions later, I found great flexibility to a custom dive.. If that is on your must list I would suggest contacting before your trip and making arrangements. The dive boat was a little narrow but quick and well maintained. I am not a big fan of "synchronized back rolls" but once again they went out of their way to accommodate those in our party that couldn't do that for gear or comfort reasons. They would go out of their way to help with gear .. getting it to the boat, providing good storage and rinse facilities... fills were never an issue.. Their boats were among the biggest on the island and bigger then 75% of the ones I have been on)

Diving was a wide variety including quite a number of small to medium wrecks, some small walls and flat coral too. Visibility was stirred up by tomas, but the diving was still in the upper 10% for me. Yes Belize and Cozumel had better viz, but the dive operation a step above of those operations. With the exception of boat size (which please understand was on the large size of Grenada and more the adequate) this operation would kick ass and take names on Bonaire. They gave a new definition to Diver's freedom .. In the places I have been I would rank, again on my biased scale, the diving as a tie with Belize (significantly more fish.. less viz) and the dive operation as second to the departed Sunset Beach Dive Center on Bonaire. A good place to dive for all levels

The dive center also was a tremendous help on arranging or suggesting tours and even when our private fixer found alternatives, they still helped and had suggestions. In my mind there is no one else to dive with on Grenada. Flexibility, courtesy Safety and friendly are the words that come to mind to describe the dive operation.

Tours to the falls, Lisa Spice Planation and Westley Rum works are all musts. We only saw a small portion of this tremendous island. It has become a solid plan for a return as it accommodates divers and non divers well

Fun at the Hotel 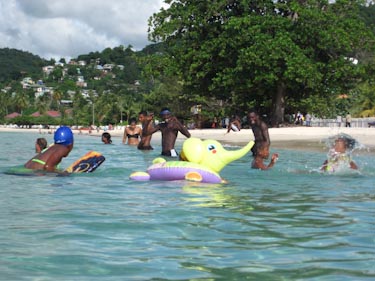 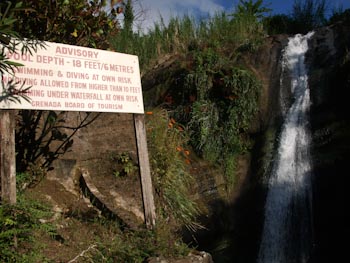